In 1905, Theodore Roosevelt occupied the White House, the average life expectancy was 47 years, only 14% of the homes in the U.S. had a bathtub, the tallest structure in the world was the Eiffel Tower, the average wage in the U.S. was 22 cents per hour, and most people got around with horses or carriages, or they simply walked.  The rich got richer and the poor got poorer.

Cars were well beyond the means of most people. It was no wonder that Alexander Malcomson, Henry Ford’s business partner since 1902, saw luxury cars as the way of the future for the Ford Motor Company.

In stark contrast to Malcolmson, Henry Ford – who had been born on a farm near Dearborn, and came from much more modest means – firmly believed that cars should be made affordable for the masses. “The way to make automobiles,” Ford said, “is to make one automobile like another automobile, to make them all alike… just as one pin is like another pin when it comes out of the pin factory.” To manufacture a luxury, six-cylinder automobile, built to compete with the likes of a Pierce Great Arrow, was contrary to all that Henry Ford believed.

Ford’s ‘make them all alike’ philosophy would not come to fruition until 1908 with the introduction of the Model T, but in 1905, Malcomson held power at the Ford Motor Company. The future, according to him, lay in more luxurious offerings. And so, in 1905, the Ford Motor Co. announced the Model K and introduced the 1906 model at the American Motor Car Manufacturer’s Association Show held at the 69th Regiment Armory in New York City.

Powered by a 6.6-liter, 405 cu in, 40 horsepower, side-valve, inline six-cylinder engine, the Ford Model K was a large, powerful, luxury automobile, as different as night is to the day when compared to the Model T. The engine drove the rear wheels through a pedal and lever operated, two-speed, planetary transmission. Selecting low, neutral, or high was made with a lever, on the outside the car, to the right of the driver.  The left foot pedal engaged reverse.  The right foot pedal engaged the transmission brake.  Also, both rear wheels had mechanical drum brakes engaged by a spring-loaded ratchet blocking lever found to the right of the driver. 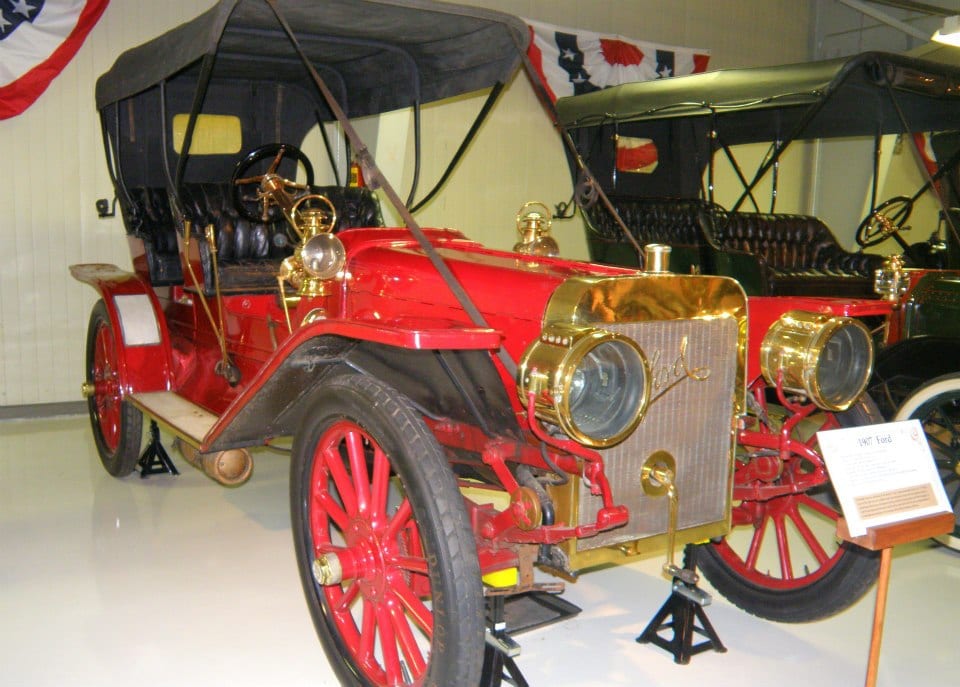 The K was initially offered as a touring car in 1906, and in 1907 a roadster was added to the lineup . Also in 1907 the horse-power was increased by 20%, raising the top speed for both models to 60 mph. A Model K driven by Frank Kulick and Bert Lorimer covered 1,135 miles in 24 hours for an average speed of 47.2 mph. Ford’s advertisements, publicizing its victory, carried the tagline, “watch the Fords go by.” That phrase’s appearance in Ford advertising over the years was an ongoing tribute to the quality and durability of the Ford Model K.

Initially priced at $2,500 without a top or windshield, the K was undeniably expensive, but amazingly, it was also relatively inexpensive compared with other luxury cars.  It never made a profit for Ford and, as such, became the Ford Motor Company’s first financial failure.

1908 was a pivotal year at the Ford Motor Company. The success of less expensive Fords, with models like the N, R and the S racking up sales in the thousands, paved the path for the Model T. Henry Ford was now a very wealthy man and was able to buy out his investors, including Malcolmson. Ford now controlled The Ford Motor Company and, free of outside management, was able to realize his dream of building a reliable, affordable, simple automobile. The Model T was born in December of 1908 and the rest, as they say, is history.

Production of the Model K and other Ford models came to an abrupt halt so that all of the resources at Ford could be turned to manufacture Model Ts. Only 1000 Model Ks, including 50 roadsters, were built during its two-year run. The Model K at the Seal Cove is one of only 23 Model K Fords left today, and is number 953, placing it near the end of production and making it the “newest” known to exist.

The Model K was Ford’s first and last foray into the luxury car field until he bought Henry Leland’s Lincoln Motor Company seventeen years later. It was also his first and last in-line, six-cylinder engine until the 1940s.

This Model K was acquired by the museum in 1964 when museum founder Richard Cushing Paine Jr., purchased 41 automobiles from a well-known New York collector, Dr. Samuel L. Scher.  Prior to Dr. Scher, the car was registered to Mrs. Dorothy A. Hebden. This is significant to us because it links the Model K to George Waterman, one of the founders of Hemming’s Motor News, and one of the first car collectors in America. Mrs. Hebden’s husband, John, was George Waterman’s agent.

See that distinctive brass Ford script attached to the core of the radiator? It is an oddity. Although it is similar in style and layout to the Ford script which would soon become Ford’s trademark, the Model K never came with any writing on the radiator. At some point, this feature was added by cutting down the lettering from a Studebaker Garford car. We are totally mystified as to why the Model K sports this odd logo, and equally mystified as to why a few of the other existing Model Ks have one as well. Perhaps Richard Paine liked to personalize his Model Ks, he owned several different ones over the years.

Although we can’t prove it yet, a cryptic note on the car’s bill of sale to Richard Paine, the museum’s founder, says, “Henry Ford’s personal car.”  That sure is tantalizing, and a book “Henry Ford, The Man And His Motives,” published in 1923, goes on to quote Ford as saying, “I owned one of them, referring to a Model K, until a year or so ago and then I had one of the boys sell it for me. It is still running.”  Imagine, Henry Ford himself may have owned and driven this very car!