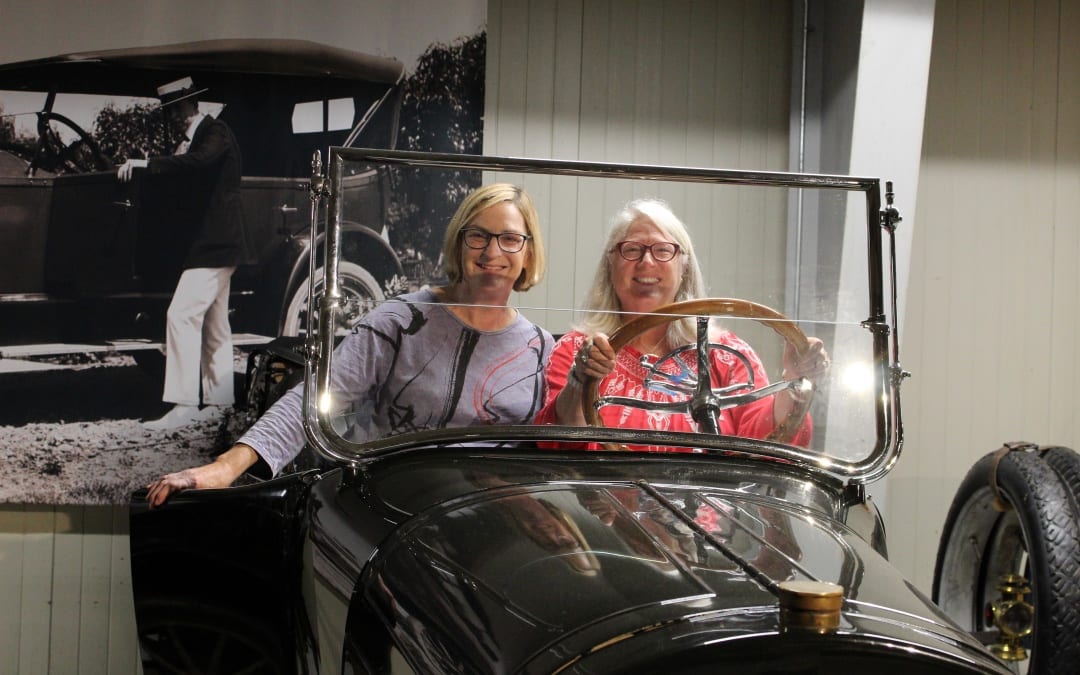 At the auto museum, we are always excited to welcome descendants of an owner or manufacturer of a motor vehicle in our collection. Last year, we welcomed descendants of Finley Robertson Porter, builder of the F.R.P., and Helen Hartley Jenkins, original owner of the 1912 Crane. In August, the Crane wowed many descendants of its original owner, as some of them came to visit during our Car-B-Que event, and we also brought the Crane to a family wedding at the Asticou Inn in Northeast Harbor.

Yesterday we welcomed Molly Kealy (pictured above in red) and her family to see – for the first time ever – an Abbott-Detroit automobile. Molly’s grandfather, Charles Abbott, was founding President of Abbott-Detroit Motor Car Company, at least for the first year, until he “retired,” according to the company’s history. 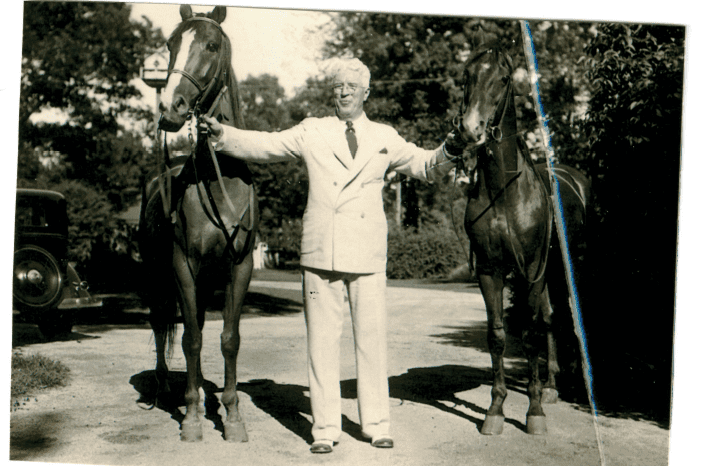 After Abbott left the company in 1911, creditors complained. They were initially mollified by being made stockholders, and the company was purchased that December by Edward F. Gerber who paid $237,500 for the plant and the entire business, paid off the creditors at 15 cents on the dollar, and vowed to continue manufacture.

He was cut out two years later, and R. A. Palmer, the former manager of Cartercar, was in. Slogans like “The One Perfect Car,”  “The Car with a Pedigree”, and “Built for Performance and Guaranteed for Life” may have been overdoing it, even for an age of gross exaggeration in advertising, but production did rise to a healthy 15 to 20 units a day – and it was this agreeable fact that prompted Abbott to overdo with a vengeance.

The company name had been changed to Consolidated Car Company with Palmer’s entrance on the scene, and in 1916 the decision was made to consolidate manufacture in a large and expensive plant in Cleveland that was leased for 10 years.

Most cars built there by the again-renamed Abbott Corporation were simply called Abbotts, though the name Abbott-Detroit continued to be used occasionally. Boy, that is confusing! Any resulting confusion was short-lived, however, because sales couldn’t pay the rent on the pricey new factory, and after a merger attempt with the Hal Motor Car Company failed in October 1917, the company proceeded into bankruptcy the following year.

Molly, named after her mother Molly Kealy, brought along her mother’s biography of Charles Abbott, along with family photographs. The biography includes some interesting and amusing anecdotes about Abbott’s life: 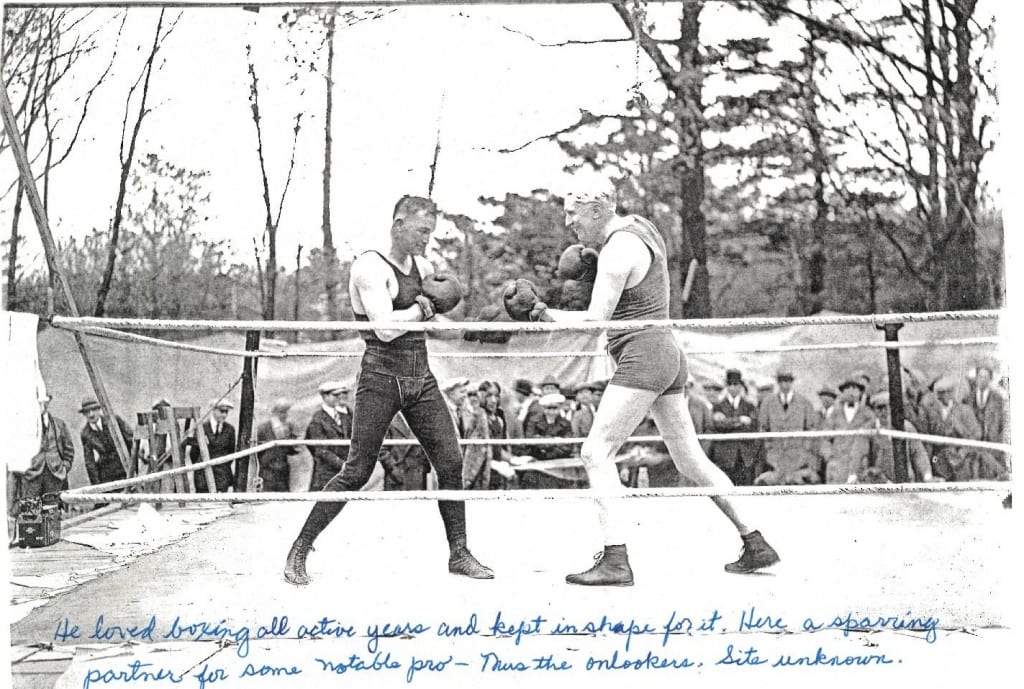 At the museum, we pulled materials from our archives to show Molly and her family, including historic advertisements for Abbott-Detroits, operating manuals for different models, and photographs from its upholstery restoration.

We were able to start up our 1916 Abbott-Detroit for Molly and her family; sure enough, everyone in the museum gathered around to check it out. Nothing like the smell of gasoline from an antique automobile! 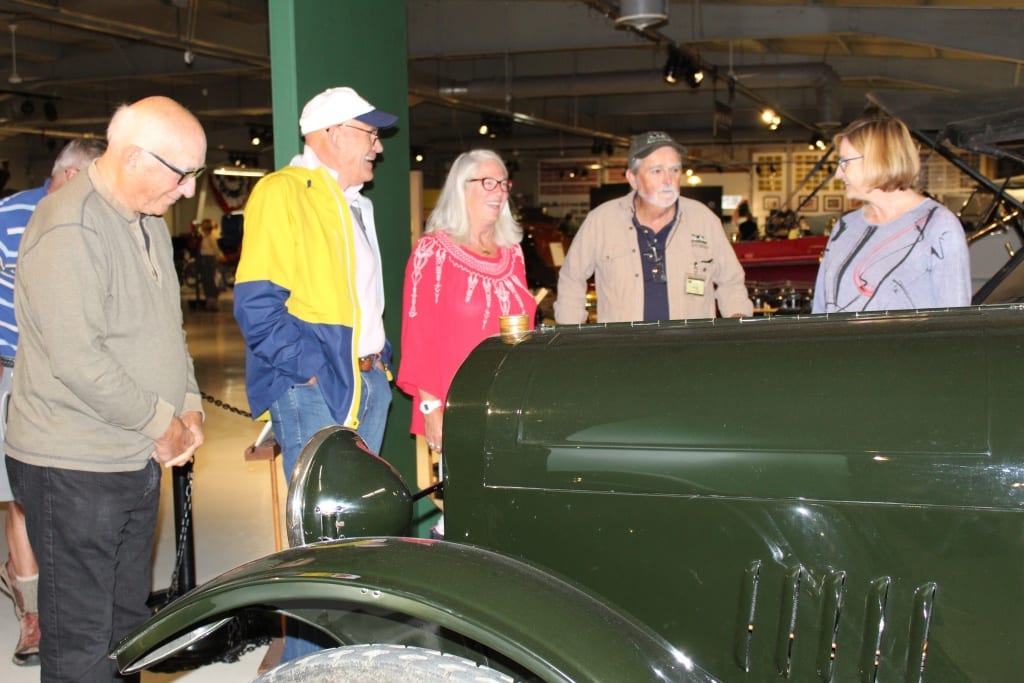 Thank you to Molly for contacting us and bringing along info for us to add to our resources library! She will be visiting again, bringing a sister along this time.

Thank you to Roberto Rodriguez, recently retired Curator of Collections at Seal Cove, for contributing information to this post.

If you are a descendant of a manufacturer or original owner, feel free to contact Bill or Jenna anytime to set up an appointment for demonstration or additional information.

UPDATE: A couple weeks later, Molly returned with her sister Abbie and together they rode – for the first time ever – in an Abbott Detroit.