Evaline Kimball was born in Rumford, Maine, on her family’s farm in 1864. Growing up, she went to live in Chicago with her uncle William Wallace Kimball, the founder of the Kimball Piano Company.

“With his great wealth and connections to high-society Chicago, William Wallace Kimball undoubtedly provided Evaline with a privileged lifestyle, a top-notch education, and the perfect setting for introductions to wealthy potential suitors,” reads a family history drafted by the Berkshire Historical Society. Evaline Kimball would go on to marry Warren M. Salisbury, president of his family’s rubber manufacturing company, and the two would build their summer home Tor Court in 1908.

Befitting their wealth and social position, Mr. Salisbury purchased a Model 5 Simplex-Crane for his wife in 1917. Mrs. Salisbury would be in good company, joining J.D. Rockefeller, Frederick W. Vanderbilt, and Alfred Atmore Pope as the owner of one of the most expensive, powerful, and quality-built luxury cars in America.

You can see another example of C.P. Kimball’s coachwork in the museum (look for the 1913 Kimball Electric manufactured by that company).

As the automobile’s name suggests, Simplex-Crane resulted from the merger of two companies in 1914, the Simplex Automobile Company and the Crane Motor Car Company.

The history of Simplex is well known to ‘Brass Era’ aficionados; how the Smith and Mabley Manufacturing Co. of New York City was founded to import European cars, and how in 1904 they built their first car, the S&M Simplex. Then, how in 1907, Herman Broesel purchased the company and went on to manufacture expensive powerful automobiles with T-head engines that ultimately produced 90 hp, and how, following Broesel’s death in 1912, his sons sold out to Goodrich, Lockhart and Smith.

Under that new management, the Crane Motor Car Company of Bayonne, New Jersey, was purchased and, with that purchase, the engineering brilliance of Henry Middlebrook Crane came to bear.

Under Crane’s direction, his L-head Six engine was refined and a 144-inch chassis was developed; the resulting car becoming the Simplex, Crane Model 5.

In 1916, the company was acquired by Wright-Martin Aircraft Corporation and in October of 1917, Wright-Martin announced the cessation of production for “the period of the war.” A total of 325 Simplex-Cranes had been built.

Although commonly referred to as Crane-Simplex, this designation is incorrect; the proper name for these few, amazing, automobiles are Simplex-Crane Model 5. 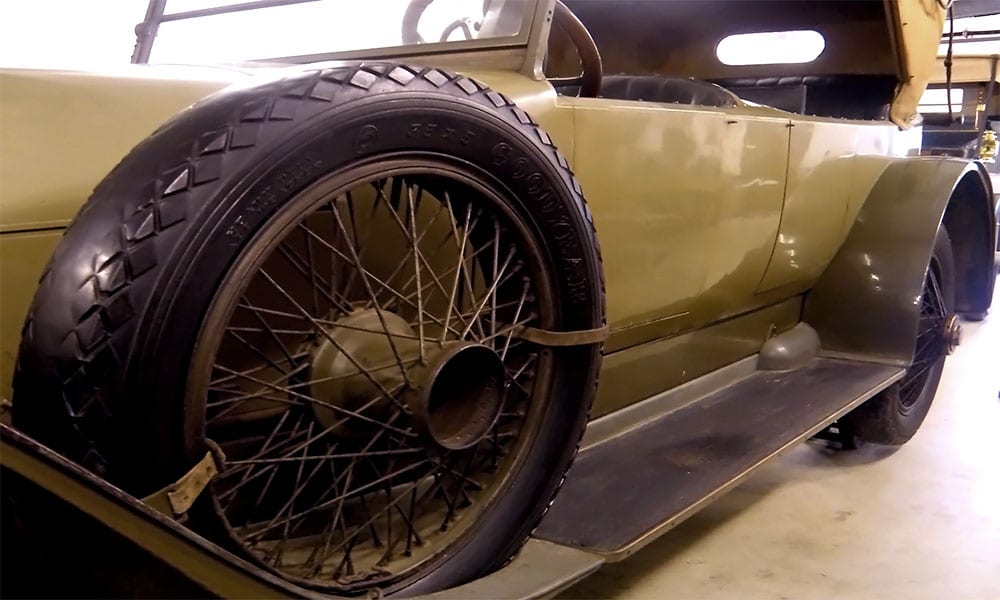 In 1920, Wright-Martin sold the last of its Simplex Automobile Company assets to Emlen S. Hare and his newly founded Hare’s Motors that also included Mercer and Locomobile. Hare’s Motors proved short lived and, in 1922, Henry Middlebrook Crane purchased the Simplex assets from the Hare group with plans to revive his masterpiece. Unfortunately, with a price of $10,000 for the car in chassis form alone, few were sold and the venture went bankrupt.

You can see one of the few surviving Cranes on display in the museum.

In 1929, during the Great Depression, the museum’s car was relegated by the Salisburys to a Pittsfield junk dealer for salvage and was purchased by Mr. Gordon Snook of Schodack Center, NY. Mr. Snook operated the Frank E. Snook’s Garage, Center and, with his wife, would become very active in The Automobilist of the Upper Hudson Valley. Mrs. Pauline Snook would become President of the AUHV in July of 1954.

Following Mrs. Snook’s passing in 1962, Mr. Snook sold the car in 1963 or 1964. It is believed that the car was acquired at that time by Richard C. Paine Jr., the founder of the Seal Cove Auto Museum.

Not only is this car large, impressive, and very rare, it is also in unrestored, original condition. You can still see Evaline Kimball Salisbury’s faded initials, E.K.S. on the rear doors.