Nothing beats a bedtime story – except perhaps a daytime story, after-lunch story, on-a-road-trip story…wait – maybe stories are just great all the way around! Picture books are an amazing way to connect young readers with new ideas and perspectives, as the combination of poetic language, succinct storytelling, and vibrant images helps build a world inside the imagination. Check out these great picture books for the young innovators in your life. 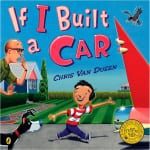 If I Built a Car, by Chris Van Dusen
“If I built a car, it’d be totally new! Here are a few of the things that I’d do. . . .” Jack has designed the ultimate fantasy car. Inspired by zeppelins and trains, Cadillacs and old planes, with brilliant colors and lots of shiny chrome, this far-out vision is ready to cruise. There’s a fireplace, a pool, and even a snack bar! After a tour of the ritzy interior, Robert the robot starts up the motor . . . and Jack and his dad set off on the wildest test drive ever!

The Most Magnificent Thing, by Ashley Spires
One day, a little girl has a wonderful idea. With the help of her canine assistant, she is going to make THE MOST MAGNIFICENT THING! She knows just how it will look. She knows just how it will work. Easy-peasy! But making the most magnificent thing turns out to be harder than she thinks. She measures, hammers, fastens and adjusts again and again, but the thing just keeps turning out wrong. If only the thing WOULD JUST WORK! A clever, honest and funny portrayal of an experience we can all relate to, Ashley Spires’s latest tale will give kids (and their grown-ups) the most magnificent thing: perspective! 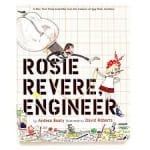 Rosie Revere, Engineer, by Andrea Beaty and illustrated by David Roberts.
This is the story of Rosie Revere, who dreamed of becoming a great engineer. Where some people see rubbish, Rosie Revere sees inspiration. Alone in her room at night, shy Rosie constructs great inventions from odds and ends. Hot dog dispensers, helium pants, python-repelling cheese hats: Rosie’s gizmos would astound – if she ever let anyone see them. Afraid of failure, she hides them away under her bed. Until a fateful visit from her great-great-aunt Rose, who shows her that a first flop isn’t something to fear – it’s something to celebrate. Andrea Beaty and David Roberts, the author-illustrator team behind the classic picture books Iggy Peck, Architect, and Ada Twist, Scientist, have whipped up another stunning, witty invention that honors pursuing one’s passion – with persistence.

The Fix-It Man, by Susan Hood and illustrated by Arree Chung
Meet Joshua James, the fix-it man. If he can’t fix it, no one can! Until…CLATTER! CLANG! CRASH! OH NO! The Fix-It Man is on the case. When a stinky problem arises, Joshua James takes matters into his own hands with a little help from his younger sister, Sophie. This playful read-aloud story with catchy text and imaginative illustrations is sure to inspire young inventors everywhere.

Poem-Mobiles: Crazy Car Poems, by J. Patrick Lewis and Douglas Florian and illustrated by Jeremy Holmes
Someday our fantastic cars might looks like cool dark chocolate bars, banana splits, hot dogs, or fish – or any kind of ride you wish. A dragonwagon! A Tyrannosaurus wreck! A sloppy-floppy-nonstop-jalopy! Zoom into this book to find twenty-one zany creations from poems such as “Jurassic Park(ing),” “23rd Century Motors,” “The Backwards Car,” and more. 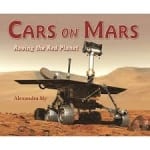 Cars on Mars: Roving the Red Planet, by Alexandra Siy
This is no ordinary road trip! In 2004 NASA’s twin rovers, Spirit and Opportunity, were sent to Mars for a ninety-day mission to find evidence of water. Designed and remotely operated by NASA scientists, these rugged cars drove far beyond their expected warranty, and they continue to survey the Red Planet’s climate and geology today. True to their names, Spirit and Opportunity trek across the extreme terrain of Mars, paving the way for the possibility of human explorers.

Bertha Takes a Drive: How the Benz Automobile Changed the World, by Jan Adkins
“Bertha, Richard, and Eugen pushed a strange machine out of the shop and into the alley. They were sneaking away with Papa’s invention!” Bertha Benz is no ordinary woman. She’s determined to show the world a revolutionary invention: the automobile. With her two young boys, Bertha defies Germany’s law against motor vehicles and sets out to drive nearly sixty miles in her husband’s Benz Motorwagen. The vehicle hits many bumps in the road, but nothing can stop Bertha – she’s fearless and resourceful, and a savvy hands-on mechanic. A true story about the first Mercedes Benz automobile of 1888, Bertha Takes a Drive is a celebration of one courageous woman and the lasting effects of early inventors and risk-takers.

Car Science: An Under-the-Hood, Behind-the-Dash Look at How Cars Work, by Richard Hammond
When a car gets moving, there’s a lot of fast, furious, and spectacular science going on. G-force, power, speed – you name it, a car’s got it. Want to find out more? Get into the driver’s seat for this turbocharged tour of car technology. Find out how muscle cars and monster trucks get their crushing power. Discover the limits of speed and acceleration.