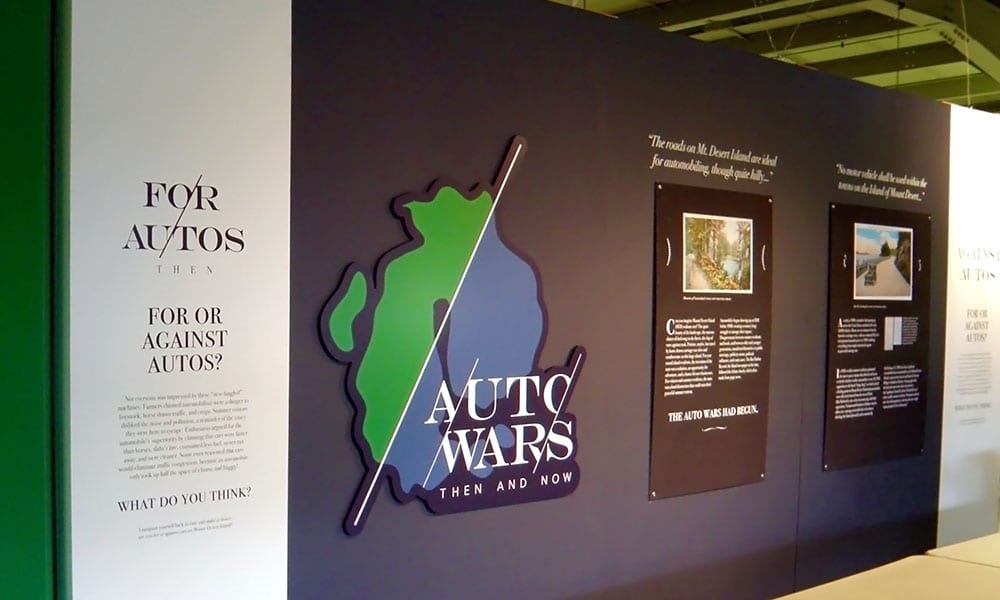 NASHVILLE, TN—The American Association for State and Local History (AASLH) proudly announces that the Seal Cove Auto Museum is the recipient of an Award of Merit for their Auto Wars: Then & Now exhibit. The AASLH Leadership in History Awards, now in its 73rd year, is the most prestigious recognition for achievement in the preservation and interpretation of state and local history.

The Seal Cove Auto Museum’s 2016-2017 exhibit Auto Wars: Then & Now commemorated the 100th anniversary of Acadia National Park, as well as the 100th anniversary of a pivotal decision that allowed cars on Mount Desert Island, forever changing its economic, geographic, and cultural landscape. The museum was transformed into an interactive space where visitors could “choose their own adventure.”

After an introduction to the debate of a century ago, visitors decided if they would have been in support of cars on MDI, or against. They were then introduced to the people leading, and publicity stunts performed in support of, their cause, and how the debate was argued through the media. Visitors then jumped forward to the story of cars on MDI today, told through digital storytelling, touch screens, and reader rails, addressing topics ranging from overcrowding to the economic benefits brought by tourists.

After putting themselves in the shoes of historic figures 100 years ago, and hearing opinions from the MDI community today, visitors had the opportunity to offer their own vision of MDI’s automotive future.

This year, AASLH is proud to confer forty-four national awards honoring people, projects, exhibits, and publications. The winners represent the best in the field and provide leadership for the future of state and local history. Presentation of the awards will be made at a special banquet during the 2018 AASLH Annual Meeting in Kansas City, Missouri, on Friday, September 28. The banquet is supported by a generous contribution from the History Channel.

The AASLH awards program was initiated in 1945 to establish and encourage standards of excellence in the collection, preservation, and interpretation of state and local history throughout the United States. The AASLH Leadership in History Awards not only honor significant achievement in the field of state and local history, but also bring public recognition of the opportunities for small and large organizations, institutions, and programs to make contributions in this arena. For more information about the Leadership in History Awards, contact AASLH at 615-320-3203, or go to www.aaslh.org.

The American Association for State and Local History is a not-for-profit professional organization of individuals and institutions working to preserve and promote history. From its headquarters in Nashville, Tennessee, AASLH provides leadership, service, and support for its members who preserve and interpret state and local history in order to make the past more meaningful in American society. AASLH publishes books, technical publications, a quarterly magazine, a monthly newsletter, and maintains numerous affinity groups and committees serving a broad range of constituents across the historical community. The association also sponsors an annual meeting, regional and national training in-person workshops, and online training.