What would you do if you had just taken over control of a debt-ridden company with a pile of unsold spare parts? If you were Charles Herman Metz, you would have come up with a plan – because not only did you possess a fine technical mind, you were also creative.  Metz had started his career as a  bicycle designer and built his own company, the Waltham Manufacturing Company of Waltham, MA, to manufacture the Orient bicycle. Not only did Metz manufacture bikes, but he also built a motorized tandem, America’s first motorcycle, in 1897. The following year Metz expanded into automobile production. It did not last long though, and soon disagreements with his investors led Metz to leave his own company. 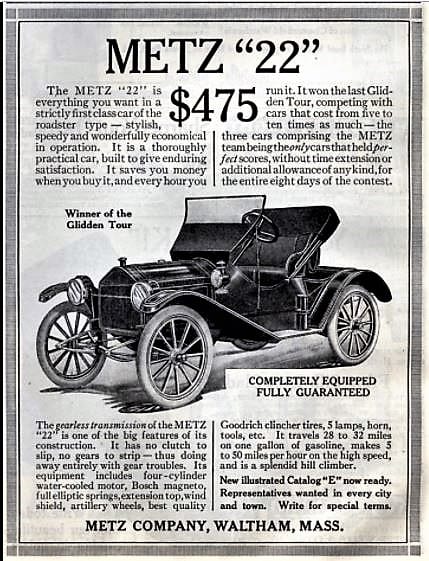 With Metz out of the picture, the Waltham Manufacturing Company fell into total disarray and by 1908 Metz, who was anticipating Waltham’s collapse, regained control. He reorganized as the Metz Company and in so doing took over a pile of debt and a pile of spare parts.  Here is where the “Plan” came in. To rid his new company of both its debt and those parts, Metz devised a new way to sell cars—the ‘Plan,’ by which a customer could purchase a crate of parts for $25, assemble them, then order another crate, and by doing so – fourteen times – assemble an entire car. It worked, and by 1911 he began offering fully built factory cars.

The unrestored, original, 1913 Metz at the Seal Cove Auto Museum is one of the factory built cars and is known as a Model 22, for its 22 horsepower four-cylinder engine that drives through dual chain-drives and a friction transmission. The body style is a Runabout that happened to be the only body-style offered.

The car cost $395 for the ‘Special’ Runabout and $495 for this more handsomely appointed example with optional electric side lamps, rear seats, and a windscreen.

Metz automobiles participated with a three-car team in the 1913 Glidden Tour and were the only cars to finish with a perfect score, a testament to the dependability and quality of this little Runabout.

Metz continued manufacturing automobiles until August of 1922 after having reorganized as Waltham Motor Manufacturers the previous year. Three of the company’s creditors shut it down, there just wasn’t another ‘Plan’ to keep it going.